Get the latest creative news from FooBar about art, design and business.

In What Year of Marriage is Divorce Most Common 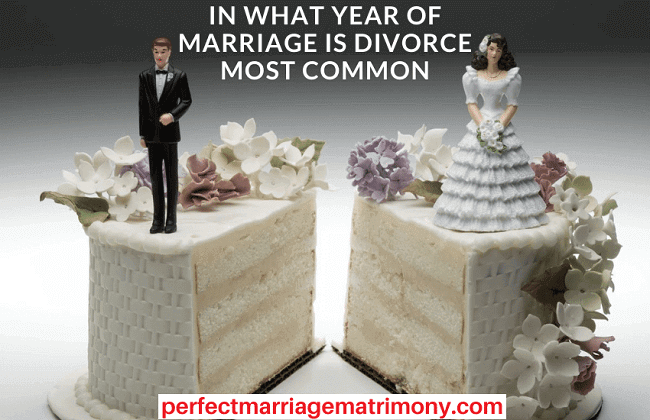 Every successful marriage is based on love, affection, and trust in each other. But there is no guarantee that it can last for a lifetime because an individual’s feelings can change over time. It may be due to some unwanted events, a change of heart of a partner, or anything, but the future is uncertain, so no one can predict what destiny has for you in its store. Nowadays, divorce has become a very common phenomenon among young couples.

The experience of marriage can vary from person to person. It is optional that if your family and friends enjoy a happy married life, you will enjoy the same; it may be different for you. We can point out some specific years of marriage in which divorce is most common through demographic research.

What year of Marriage is Divorce Most likely?

During the above period, divorce is more likely to happen. But it may only be right in the case of some couples. It is just data based on average.

What year of marriage chances of divorce is least?

It is assumed that the couples whose marriage can survive through the seven-year itch can expect another seven years with the most negligible chances of divorce.

Recent research found that divorce is least likely to happen between the 9th to 15th year of marriage. It is because the couple has faced all the blows, ups, and downs during the prior years of their life, and now they have developed a strong bonding with each other.

Reasons for Failure of Marriage:

There are various reasons for a marriage to fail. Here are some most common reasons:

Money is a two-faced enemy. On the one hand, it can solve all your problems; on the other hand, it is the reason for all the issues. It is true in the marriage too. It is generally seen that money is the reason for divorce for most low-income couples or when financially well couples start facing a financial crisis. They start fighting over the bills and increasing expenses, eventually creating a bitter environment between couples, leading to their separation.

2.Trouble with family members of partner

The human mind is completely uncertain. With increasing age mindset of a person also starts to change, and with the change of mindset, their plans also tends to change. It is likely that, at the time of marriage, both partners have different plans, but their plans will start to change over time. There are possibilities that your spouse starts having issues with your new plans, and conflicts will arise in your relationship, eventually leading you to divorce.

There doesn’t need to be any reason for a couple to split up or part their paths away. Sometimes, couples start feeling out of love, and the strong connection between them starts to fade away with the span of time.

The real world is completely different from the perfect world, where all marriages or relationships are monogamous. Recent research has discovered that the reason for divorce in most marriages is an extramarital affair of a partner.

Factors that lead to the reasons for divorce

1.Marriage at an early age

Couples who get married at an early age are more likely to have the risk of divorce because the differences and conflicts between them start to grow with their age.

Any kind of mental and physical abuse to a partner is unacceptable in a marriage. If a spouse starts behaving violently with others, then it will increase the chance of their divorce.

It is seen that if the sexual needs of a partner is not getting satisfied in a marriage, they are more likely to cheat on their partner, which is one of the biggest reasons for divorce.

4.Pregnancy in the early stage

Pregnancy in the early stage of marriage can also end the spark between the partners. They will get fewer chances to develop a strong bond and eventually fall out of love.

Ways to solve issues in marriage

Lack of communication or miscommunication is one of the biggest reasons for divorce. You should always communicate everything with your partner, whether good or bad. It will help in building trust between couples.

2.Accept the choice of your partner

Try to accept the choices or decisions of your partner whenever necessary. They only sometimes try to go against their choices.

3.Do not assume anything

You should not assume anything without discussing it clearly with your partner. It is one of the biggest reasons of misunderstanding between couples.

4.Be honest in a relationship

Honesty is the most important thing which a person wants with their partner. So, be honest with your partner in every kind of situation. Your partner will understand your problem and support you if you are honest.

Marriage is a very important decision of a person’s life that should not be taken in a hurry. Mutual efforts are required for a relationship to work out, especially during your marriage’s harsh years.

25 Relationship Deal Breakers for Women Every Man Must Avoid